I am posting this to try and save lives or property. I bought a stoker coal stove on December 23, 2016 that has an Intermatic C8835 mechanical timer. This timer unit is a 30 minute timer that normally rotates in a clockwise direction and completes one revolution every thirty minutes.  Around the perimeter of the timer wheel are slots which receive small metal "tripper" keys. As the timer wheel rotates these tripper keys then activate a normally open microswitch that in turn activates the coal stoker drive motor which pushes unburnt coal from the coal hopper onto the fire grate and this pushes the burnt coal ash off of the grate and into an ash bucket below.

On January 16th, 2017 when I returned home from work the temperature in my house was 100 degrees and the stoker was feeding continuously. And yes the thermostat had met the room set temperature.  At that time on my investigation I thought that the Intermatic timer wheel had simply stopped turning with the normally open microswitch in the closed position.  So I de-energized the stove and then re-energized the stove and the timer returned to service and was turning in it's normal clockwise rotation. So everything was good, or so I thought.

Note that the next day I tested the faulty Intermatic timer unit and found it then to be turning in the correct clockwise direction.  As the unit at the time of this test was not mounted on the stove I am thinking perhaps the mounting location of the timer on the body of the stove could possibly be causing the failure due to heat. But I cannot confirm that as I returned the faulty timer to my local hardware store that I purchased the coal stove from. 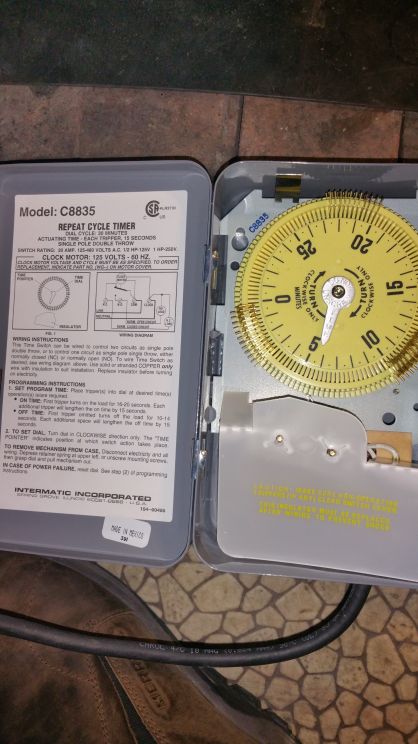 So if you have a stoker unit with one of these units I would suggest that you replace it with another unit and also add an over-ride thermostat unit to de-energize the entire stove unit if there is a problem and your unit begins to overheat the room as mine has now twice done.  FYI the stove manufacturer says that there is a second micro-switch that supposedly shuts the stoker drive motor off if the temperature of the stove climbs above 200 degrees.  However that safety over ride is not working on my stove either.   Bottom line is I want anyone and everyone that has an Intermatic  C8835, 30 minute mechanical timer, with a 125 volt AC, 60 hertz drive motor to be aware of this as soon as possible since it will probably take a few months before the NFPA can investigate this and make a determination on the safety hazard of this motor.

These OEM Intermatic timers are also apparently used to control some pool filter units but this problem would not necessarily create a life safety hazard as the coal stoves do by overheating and potentially causing a fire.

The stoker manufacturer has advised me that there has been some issues with this Intermatic timer switch unit since Intermatic began sourcing them from a manufacturing facility in Mexico.  Which makes this the second electrical item in my house in the last two months that was made in Mexico to have an fire safety hazard electrical fault that has occured.  A Samsung TV "blew out" the transformer with a loud electrical crack/snap and a puff of smoke.

Here is a link to a picture of the circuit board showing the transformer issue.

And yes I have contacted the coal stove manufacturer but I have also contacted Intermatic as well.  So please if you have one of these units be aware of this issue and take necessary precautions until this issue is corrected.